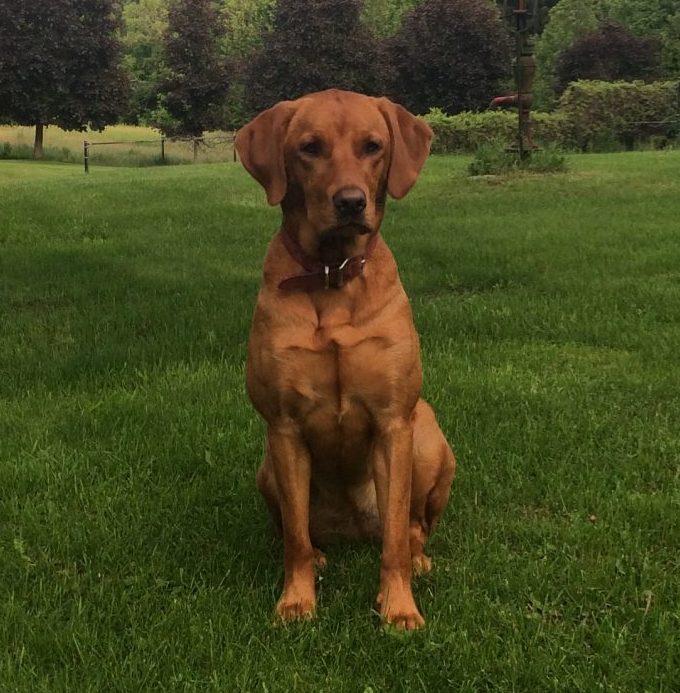 The Labrador falls into the breed category of ‘gun dogs’. The history behind his development as the world’s most popular dog is a fascinating story. The origins of the Labrador have shaped his appearance, personality and behavior.

The Labrador was originally bred as a fisherman’s companion, working alongside the men and women who lived and worked in the hostile climate of Newfoundland.

The job required a thick, waterproof coat that could withstand the frigid temperatures, and the strength to swim in strong currents for extended periods of time.

Once imported to England, the Lab’s role morphed into that of man’s shooting companion. His skill at finding game, ability to carry objects in his mouth without harm, his intelligence and amenable temperament would make him the world’s finest and most popular retriever.

From those early beginnings, the role of the Labrador Retriever has diverged into many different disciplines from therapy dog, to gun dog, to loyal companion and competitor. His competence at everything he is asked to do, is his true defining quality.

Physical Characteristics of the Labrador Retriever

The Labrador retriever is a sturdily built, medium to large-sized dog. He can weigh-in anywhere from 50 to 80 lbs once he reaches adult size, depending on his breeding. You can refer to the Canadian Kennel Club’s breed standard for more information.

He has a well-proportioned body with a healthy balance between length of leg and length of spine. A shape that is often described as ‘short-coupled’. 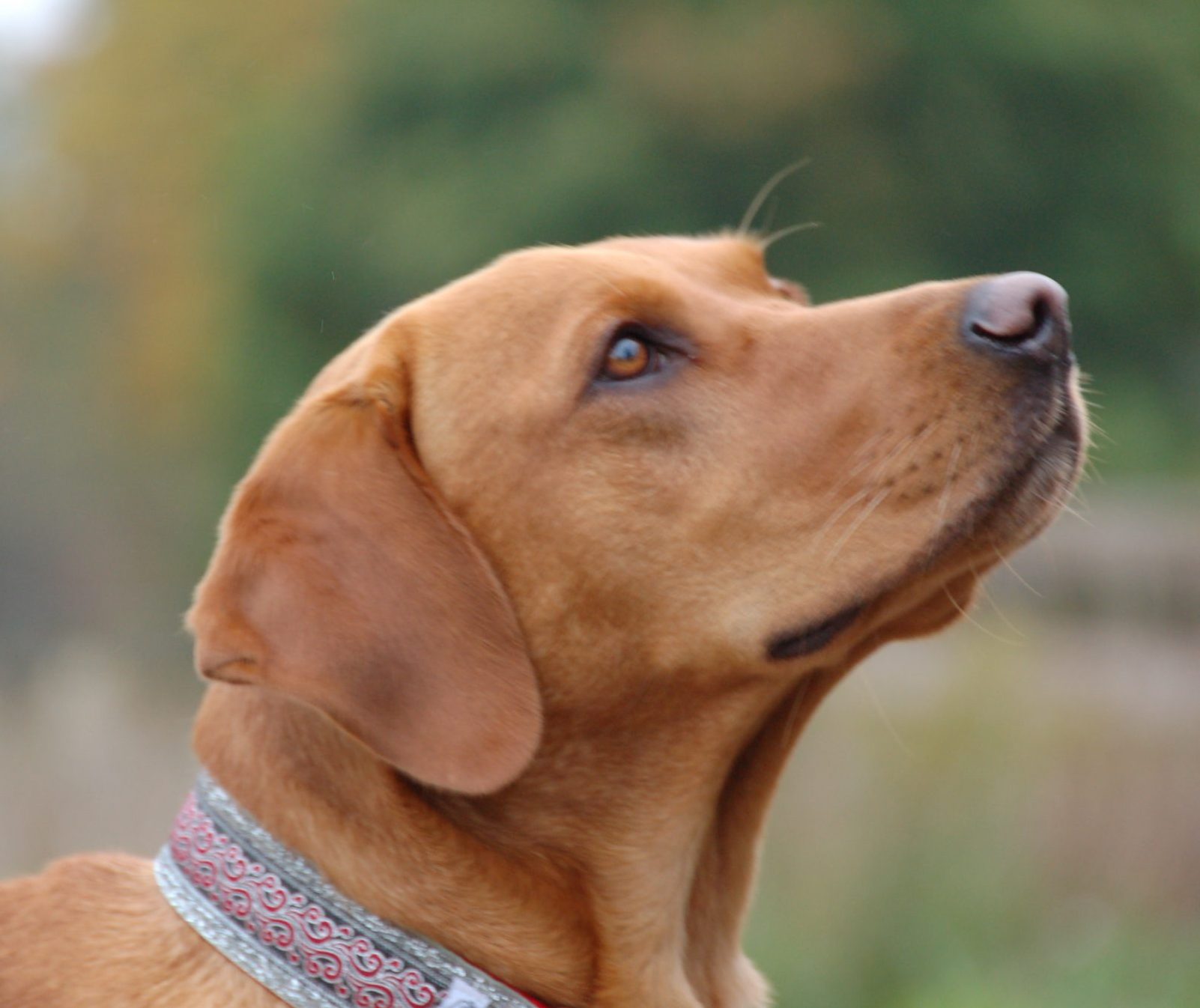 The distinguishing features of the Labrador Retriever are obvious.

He has a broad skull with chiseled facial features that are softened by his kind eyes and soft ear flaps. His well-muscled body is powerful and ends with a thick, tapered tail that comes to a point.

His full-length snout ensures excellent air supply and cooling. He has a strong set of jaws with 42 large, white teeth.

The coat has a shiny, slightly oiled surface and his individual hairs are straight and a slight ripple can be observed along the back of some adult dogs.

The thick undercoat and water resistant top coat will keep the Labrador warm in the coldest water. A quick shake is all it takes to remove most of the excess water.

The genetics behind the Labrador’s coat colour is interesting and easier to understand than many other dog breeds. Labradors come in only three colours. Yellow, Chocolate (formerly Liver), and Black.

Terms such as ‘Golden Labrador’ or ‘Fox Red Labrador’ aren’t recognized by the UK and US Kennel Clubs, they are simply variations of the colour yellow.

Overall Appearance of the Labrador Retriever

With his smooth, water resistant coat, soft-flapped ears and thick tail that resembles an otter’s, the Labrador looks almost seal-like. This really shines through when you see him in the water, swimming low and strong with his strong, webbed paws.

The Labrador is equally sleek and powerful on land, looking every bit the canine athlete that he is. 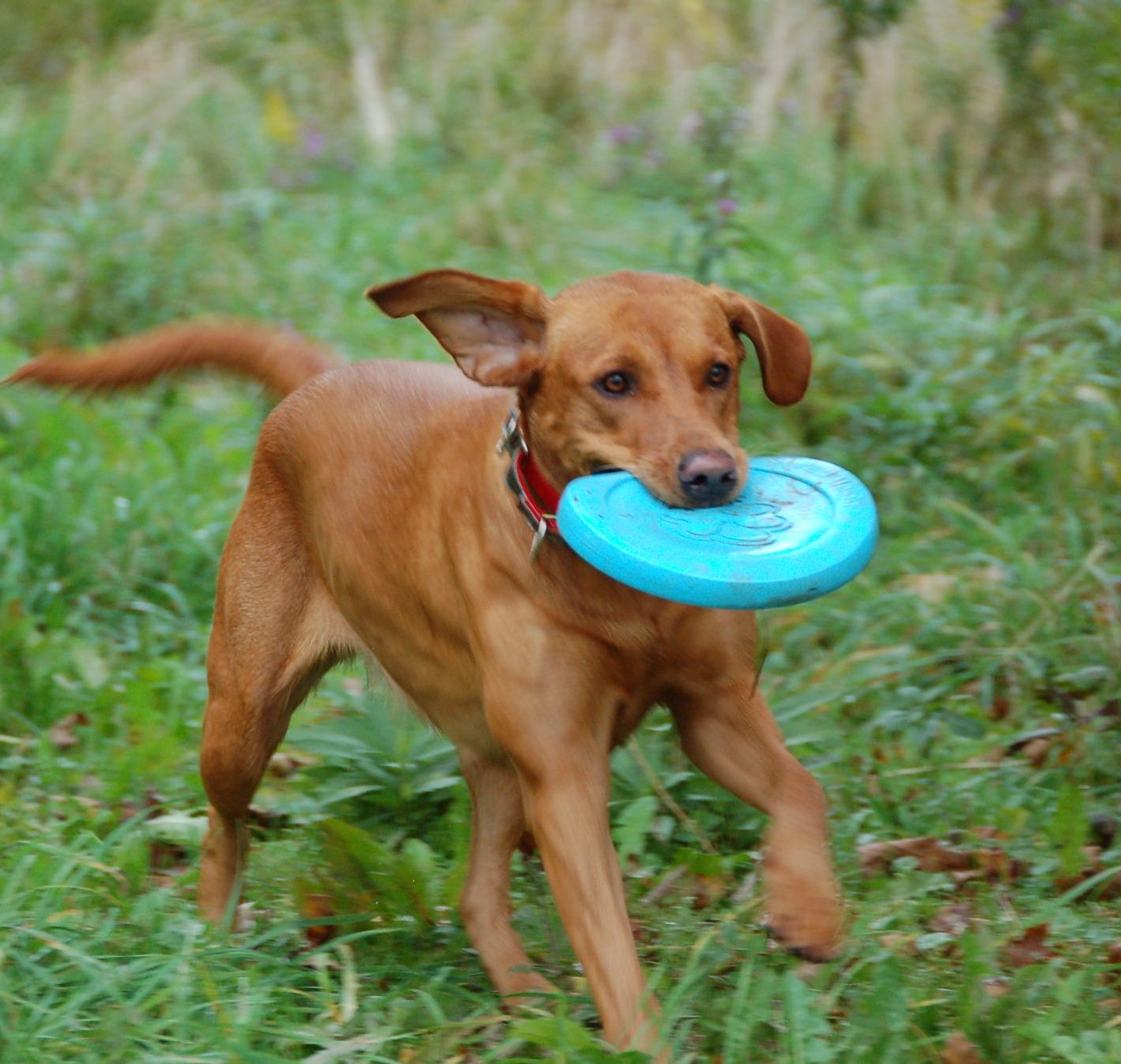 The Labrador is a versatile dog able to sprint quickly over short distances or lope with confident ease over long distances.

For his size he is very agile and can jump heights in excess of 1 meter.

These physical capabilities will vary depending on the type of dog you have.

The Labrador’s kind eyes belie his gentle temperament. His love of water is also a classic trait of the breed. That said, not all Labradors fit this breed description exactly.

Sometimes poor temperament traits such as aggression and nervousness can appear in Labradors. This is not the norm generally speaking.

It is important to research your breeder and choosing the right puppy is important and will lead to a well-balanced adult dog.

Born from generations of being bred for retrieving in the shooting field, the Labrador has some special and important breed features

The Labrador’s gentle jaws, are capable of carrying delicate items such as game with no harm, and their urge to pick up and carry things is strong.

His extraordinary sense of smell allows him to track items by scent alone. The breed is highly sought after in fields such as borders and customs, bomb detection and tracking sports. 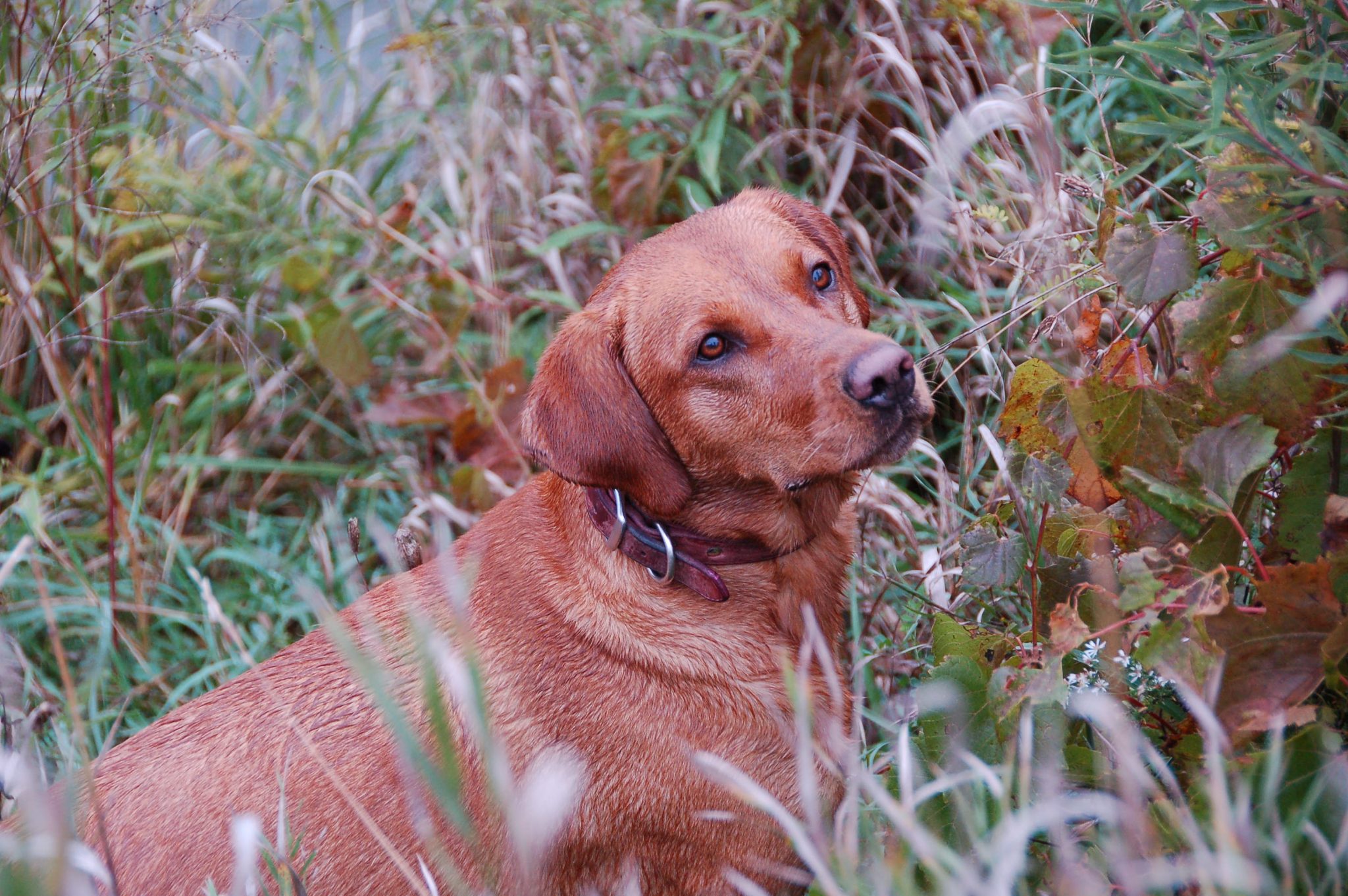 Many owners are convinced that their Lab has a sense of humor! Some Labradors can be extremely playful, even into their adult years. Others can be clumsy and bouncy, especially when young.

Temperament, abilities and general personality vary somewhat from dog to dog. But the Labrador retriever can be divided into two distinct types.

Some of the traits of the Labrador Retriever depend which group of Labs he belongs to.

Over the last fifty years or so, Labradors in both the United Kingdom and the United States have effectively become divided into two quite distinctive strains: Show-bred dogs and Field-bred dogs.

Characteristics of ‘English’ or Show-Bred Labradors

Most people are familiar with the iconic image of the broad headed, heavy weight show bred lab, known as the English Lab in the USA and the Show lab in the UK.

The AKC describes the labrador as being distinguished by its “short, dense, weather resistant coat; an “otter” tail; a clean-cut head with broad back skull and moderate stop; powerful jaws; and its “kind,”friendly eyes, expressing character, intelligence and good temperament.”

He is also described as ‘agile’, though this my be an optimistic description of some show dogs due to their sturdier frame and increased weight.

Characteristics of American or Field-Bred Labradors 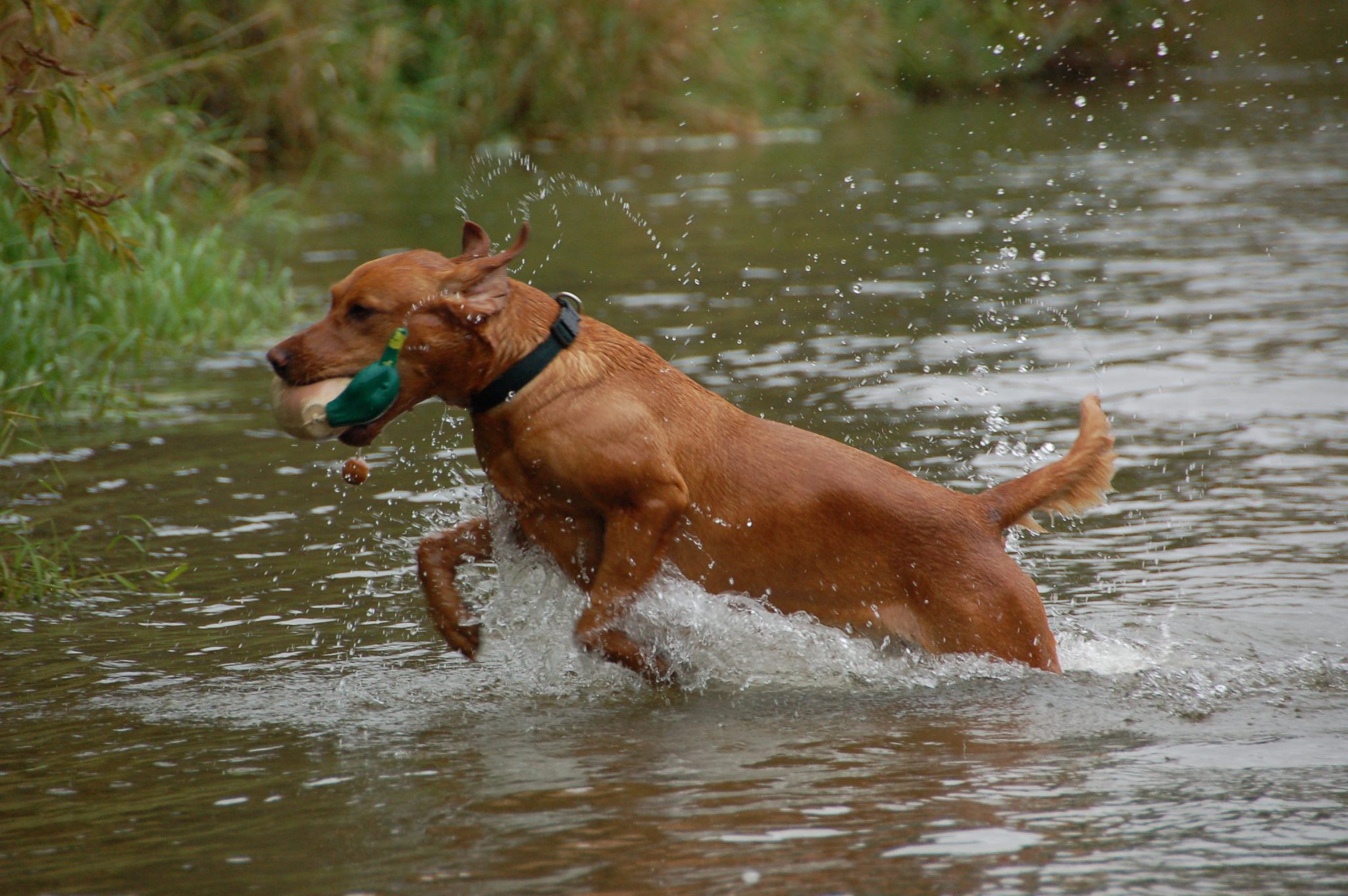 A large number of Labrador Retrievers are bred each year from working stock, and their appearance is noticeably different.

The field bred Labrador, known as the American Lab in the USA and the Working Lab in the UK, is an altogether ‘sleeker’ specimen than his show ring relatives.

He’ll most likely have longer ears, a narrower head and slimmer appearance.

His eyes may be closer together and more forward facing. They’re generally more ‘sensitive’ in nature, and more enthusiastic about retrieving and generally racing around.

Most Labradors, including show-bred specimens possess a natural urge to retrieve things.

This is often reflected in their fondness for gently carrying things around in their mouths or sometimes chewing things up.

The basic urge to chase and pick things up is the result of generations of selective breeding for the Lab’s original purpose. The instinct to bring those objects back isn’t always apparent…

Should You Get A Labrador Retriever? 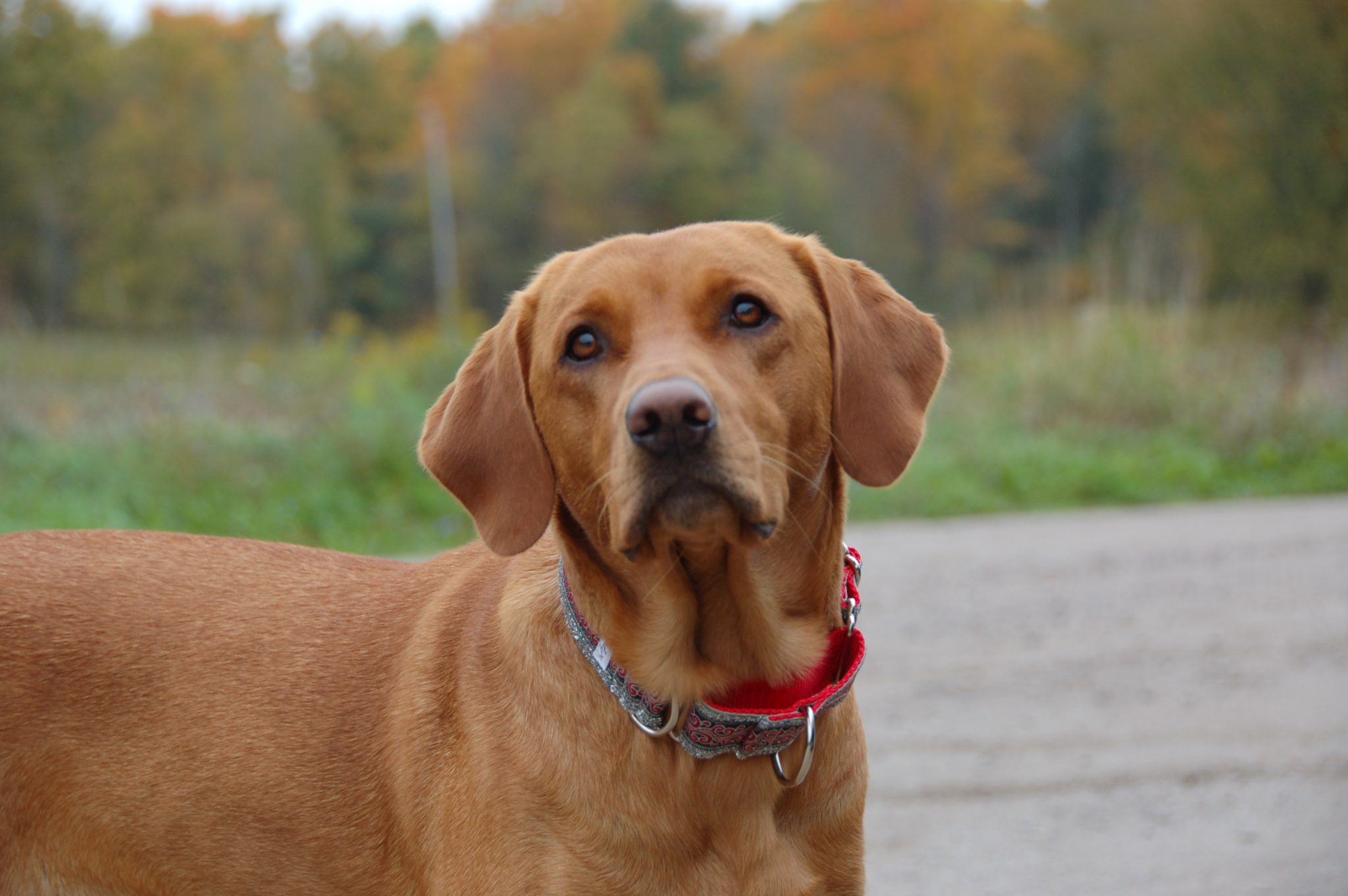 These dogs are friendly, enthusiastic and possess a sense of fun.

Despite the differences between show bred and field bred Labradors, there are still many trait that are common in both strains.

Particularly their dependability, good natured disposition, sense of fun, and love of human companionship has made them so popular as pets today.

That said, the Labrador is first and foremost…a retriever.

His true role is to remain at his master’s side at all times, until ordered to retrieve an animal or bird that has been shot.

Anything he is asked to do, he is expected to do eagerly, quickly and without question.

This highly co-operative and intelligent temperament befits his role perfectly and it is what has made him such an indispensable role for so many jobs in our society.

It is not surprising that the Labrador Retriever is pretty much the most popular family pet in North America, the UK and many other parts of the world.

Who are Labradors well suited for?

Despite their popularity, Labrador Retrievers are not suited for everyone. They’re a large dog that is rambunctious and destructive when young. They shed a lot of hair, they love the mud and rolling in dead things.

Labradors are social and affectionate dogs who do not like being left alone for long periods of time.

Derby is a well-rounded dog, great with family or as a working dog. Her pups will do best in a family home that also incorporates sports and/or hunting.